Looking for Snowy Owls across Canada

This app is dedicated to helping you find one of winter's most elusive and exciting birds, the Snowy Owl. By providing you with live maps, real-time Canadian sighting data, and a little knowledge, I hope to get you out and braving our Canadian winter, confident that you can find these amazing owls if only you look in the right spots and don't give up too easily!

A big part of not giving up in your search is knowing that other people are seeing Snowy Owls nearby. I read an article recently about how rare Snowy Owl sightings are on Prince Edward Island. But a quick look at the map showed 4 sightings in the past month alone! As I write this (December 16, 2020) there have been over 500 reported sightings across the country, from Fort St. John in the west to Sable Island National Park in the east, and the winter migration is just getting started. Without good data, it's hard to know if our own experience, or that of our neighbours, is reflective of what's actually happening right now. 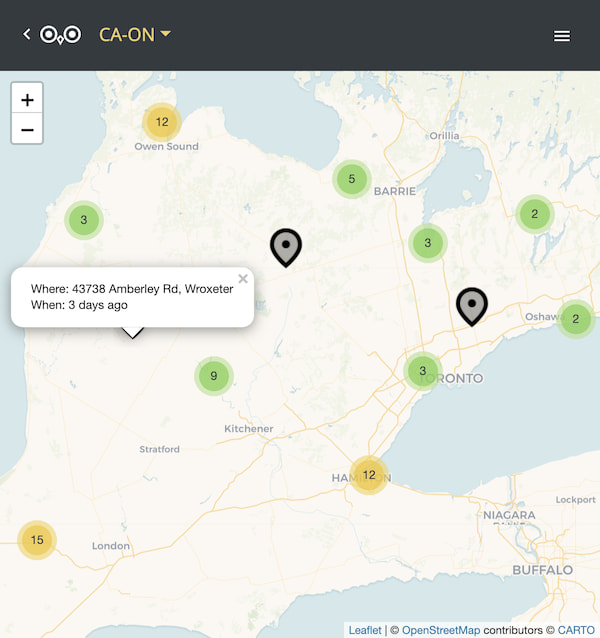 The map shows sightings for the past 30 days. Click a sighting for more info. Multiple sightings are grouped together. Click a group to expand. You can also see this same data as a table.

SnowyOwls.ca uses live data from eBird.org, which collects global birding data for science, conservation and education. This public dataset is used to show you recent Snowy Owls sightings for the last 30 days across the country.

The Snowy Owl (Bubo scandiacus) is a top predator of the northern Arctic. These large white owls live and breed on the open tundra, or near costal habitats. They are remarkable both for their appearance and nomadic southern migration.

We tend to think of Snowy Owls as pure white, but there's quite a range in their colouring. They can be pure white (males), to heavily barred (often females), darker (often male) or pale (often female). Their other major physical characteristics include bright yellow eyes and toes covered in feathers, hiding deadly black claws. The vast majority of the Snowy Owls we see in the south are likely juveniles (i.e., under a year), which haven't yet molted their flight feathers.

When can you see them?

Although it is theoretically possible to see a Snowy Owl at any time of year in Canada, the most likely period is during the winter months, November through March. Historical sighting data helps demonstrate this:

Why are there so many more in some years?

While these owls always migrate south in the winter, something truly special happens once every 3-5 years, when their numbers explode. Such years are known as irruptions—large scale, irregular migrations over great distances . For example, the winters of 2011-2012, 2013-2014, and 2017-2018 were all irruption years.

Such cyclic irruptions have been documented as far back as the 1800s. They were originally thought to be linked to a declining population of small arctic mammals (e.g., lemmings and voles on which the owls feed) and that the owls came south in search of food. However, modern research has put forward an alternative theory: that the larger population of owls indicates greater offspring success and numbers, due to an increased food supply in the previous year.

Snowy Owls can lay upwards of 14 eggs in a clutch, and when there is enough food to feed so many young, the population explodes. Also, the owls migrating south are typically in good health and not emaciated, as one would expect if they migrated out of hunger.

How do I find them?

To find Snowy Owls, you have to begin by looking for southern landscapes that are capable of supporting their dietary needs. Consider that Snowy Owls are hunting small mammals and migratory water birds, ducks, gulls, etc. The former will most often be found in open fields, the latter along shorelines and in small lakes and ponds. You're trying to find habitat that will support these in abundance. As the temperature drops, Snowy Owls need to eat more often to stay warm. They need access to lots of food.

Next, Snow Owls are usually solitary, and highly nomadic. Recent research using GSM transmitters fitted to owls has shown that they will often return to the same areas during winter. Some owls will move around a great deal (100s of kilometers), while others will stay within a 1 kilometer range. If people report seeing these birds in an area, get to that area! The live maps should give you an edge here.

Snowy Owls are often found near airports, which prove ideal because of the wide-open, grassy areas, which are home to many small mammals. Airport authorities often do live trapping to remove them from the area (for example, 17 were caught at Pearson during December 2014).

Another trick is to let other birds reveal the presence of Snowy Owls for you. Crows, Jays, Chickadees, and other smaller birds will often mob daytime roosting owls. If you see Crows gathering in the middle of a field, Blue Jays dive bombing, or hear agitated calls, it's worth investigating.

Snowy Owls are generally quite naive around humans, and usually won't spook easily. But give them lots of room and respect their territory, so as to avoid harassing them. Your car provides a useful blind, and allows you to observe them without getting too close or causing them a lot of stress.

What about time of day?

Snowy Owl hunting happens mostly during the night, and during the day they will usually be roosting. However, unlike many other owls, they are diurnal, and will also hunt during the day. In the arctic they have to hunt in the perpetual daylight in certain seasons, so they are accustomed to daylight hunting here in winter.

That said, during the day you want to look for good roosting locations. Snowy Owls are less likely to be moving around when the sun is out. Ideally you want open landscapes (think Arctic tundra)—shorelines, beaches, rocky points, farm fields, meadows, prairies, grasslands, golf courses, open areas with few trees, or with trees around the edges. Often when you first notice a roosting owl, it's nothing more than an odd bit of white in the middle of a snow covered field, sitting motionless on the ground. If your eye catches something just slightly off in the middle of a corn field as you drive, take a second to look again.

Just before dark the owls will begin to stir and get ready to hunt, moving from the ground to higher perches. As the sun is setting you've got a better chance to see them if you look out for: piers, fence posts, antennas, roofs, haystacks, light and hydro poles, silos, chimneys, water towers, tree tops.

Have Fun Finding Them

If you haven't found one before, it can seem impossible. When it does finally happen, it's always special. Enjoy it! Remember, you don't have to own a great camera, travel very far, or be a serious birder to take part in this winter migration. If you want to add a sighting to this site, please submit the details to eBird and it will automatically show up here too.

Make this the year you find one for the first time. Use the map and find a productive spot near where you live. I promise you that Snowy Owls are indeed out there, and it's worth the time to go and find them.

Good luck as you look for these amazing owls. You're not alone in the search.